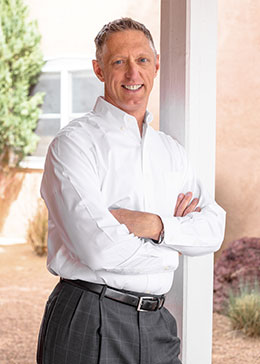 Dr. Wolcott received his D.D.S. from the University of Colorado Health Sciences Center in 1992. He completed a General Practice Residency at the University of Tennessee Medical Center in 1995 and pursued advanced training in endodontics at Albert Einstein Medical Center, where he received his Certificate in Endodontics in 1998. He spent 13 years as a partner at an endodontic practice in Colorado Springs before opening Endodontics of New Mexico in 2012.

Raised in New Mexico, James has returned to raise his own family and work with the Santa Fe dental community to offer specialized endodontic treatment and emergency care to the patients of North Central New Mexico.

Our endodontist is often complimented on his level of care and dedication to patient’s comfort.

You can conveniently access our online patient forms to register with our office before your first visit.

We appreciate and collaborate with a variety of local dentists and dental professionals.